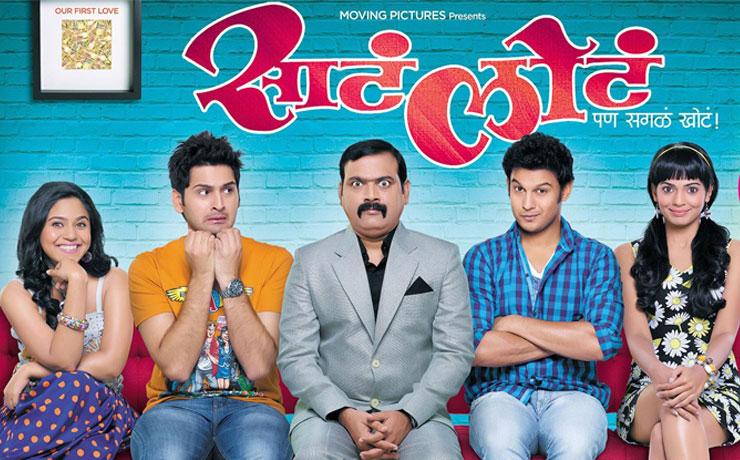 Share this
One can sympathize if a new Marathi filmmaker finds themselves influenced by Bollywood's treatment of comedies. But few expected Shrabani Deodhar, who directed the promising ‘Sarkarnama,’ to follow suit with 'Sata Lota Pan Sagla Khota.'
‘Sata Lota Pan Sagala Khota’ was hailed as Shrabani's comeback as writer and director, hence the stakes were high and there was much to lose. What she did come up with though, seems to be inspired by the 2010 Bollywood hit 'Housefull.' The film in fact, does seem to draw from multiple Bollywood influences. For instance,the lead actors of the film, are aptly named Jai & Veeru. However, Shrabani's protagonists don't resemble Jai & Veeru’s characters of  Sholay; one might relate them more to the Jay Paaji and Veeru Paaji from any David Dhavan film.
Presented by Moving Pictures, ‘Sata Lota Pan Sagala Khota’ presents Jay (Adinath Kothare) who is financially supported by his maternal uncle Satyavan (Makarand Anaspure), after his parents' untimely death. Satyavan , who is into smuggling along with his sidekick Rokade (Pushkar Shrotri) is arrested and sent to prison. However, he somehow escapes from jail and moves to Dubai.
Even then, Jay still gets enough money from his uncle to spend on his friends Veeru (Siddharth Chandekar) and Vasanti (Mrunmayee Deshpande). Luckily for Jay, he also finds a girlfriend Ishika, the daughter of a film maker, who helps him in running a children’s home. His uncle though grows suspicious, and on the advice of his sidekick, hires a private detective to keep a watch on Jay’s movements.He then tries to find out if Jay really is married, and returns to India where something similar to the sub-plot of 'Housefull' unfolds.
A glaring flaw in the film is its lack of imagination, save for the last 15 minutes of the film, which has the audience in splits. The film has very good performances coming from a talented cast, comprising of Makarand Anaspure, Pushkar Shrotri, Siddharth Chandekar , Adinath Kothare, Mrunmayee Deshpande , Pooja Sawant, Nagesh Bhosale, Manini Mishra , Nishigandha Wad and many others. But a weak screenplay pulls down the film to mediocre at best.
Except for one song, the soundtrack isn't very impressive either. A standout plus for the film is its excellent cinematography; Rahul Jadhav has done excellent justice to the indoor and outdoor sequences, including the songs.  All in all, ‘Sata Lota Pan Sagala Khota’ is an average attempt at a Marathi time pass film.