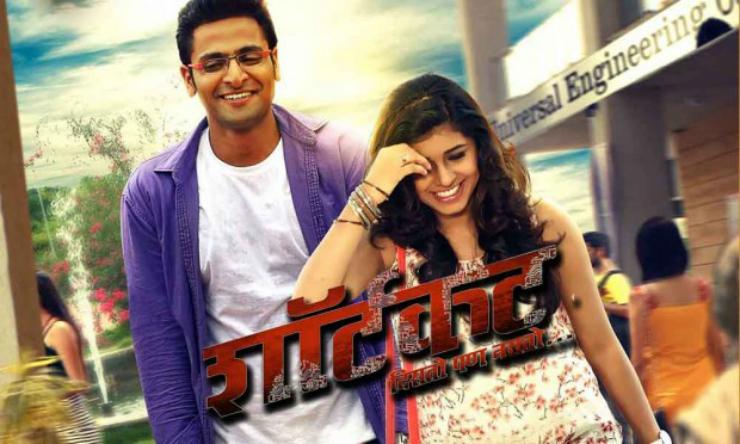 Share this
As we notice developments in technology, we find more and more sophisticated crimes taking place these days. In fact, the mindset of some people is also changing, towards committing crime. Cyber-crime is one such type of crime and latest Marathi film ‘Shortcut Disto Pan Nasto,’ made under the banner of M.K.Motion Pictures, is based on this theme. Director Harish Raut, while presenting this cyber-crime based film, has mixed it with romance and thrills.

A middle-class youngster, Rohit Pradhan ( Vaibbhav Tatwawdi ), joins an engineering college in a city. While proving his ability in studies, he falls for the charming and talented Ishika ( Sanskruti Balgude). Initially, she doesn’t give him much importance, but as Rohit becomes richer quickly, she gets attracted towards him. The twist arrives when she comes to know that he has become richer thanks to his expertise as an internet hacker, following which she tries to keep distance from him.

When Rohit lands into trouble, he succeeds in persuading ACP Rajesh Nimbalkar (Rajesh Shringarpure), as to how he has been trapped in this activity. Due to his willingness to help, he is acquitted. The ACP then assigns him a task to enable him to catch the real criminals behind the crime.

This suspense filled crime story has been glorified through its screenplay. Vaibbhav Tatwawdi has played his role very thoughtfully .Rajesh Shringarpure has succeeded in holding the suspense till the climax, about the behavior of his character. Sanskruti Balgude shines in a bold and glamorous avatar as well, and her presence in this film, is an advantage to what otherwise feels like an unnecessarily dragged film.

‘Shortcut’ has limited content. But director Harish Raut has somehow managed to expand it, with the help of Vinay Narayane and Rajesh Balapure’s combined efforts on the screenplay. They could have worked harder in its presentation. Out of four songs, two songs are in Hindi and they have been used at proper places. All in all ‘Shortcut’ is a visual delight to watch.