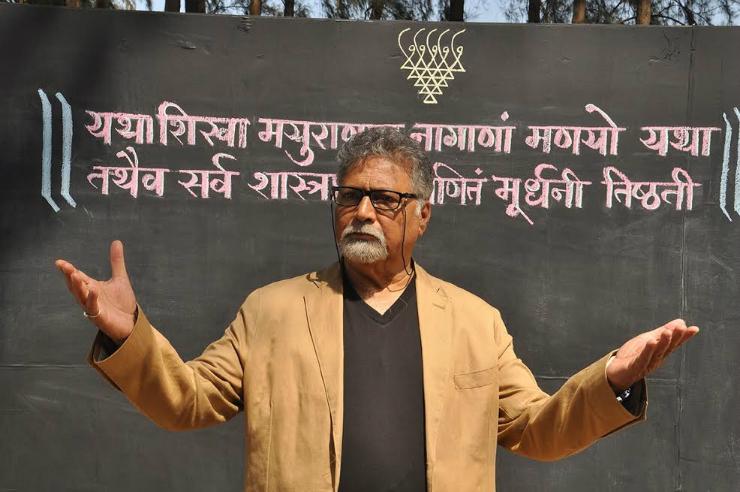 Share this
In Marathi film industry, besides the conventional films there are almost equal number of intellectual films made, to offer variety to the movie lovers. Latest release  ‘Siddhant’ made under the banner of Navalakha Arts & Holy Basil Entertainment, falls in this second category.

Written by Shekhar Dhavalikar and directed by Vivek Wagh, the film offers a unique script, which is based on the principles of mathematics. Though the director has worked hard on the cinematic presentation of the story, it’s lengthy in the first half, and fails to pick up with its main theme early.

The story of this film revolves around the attachment between mathematician grandfather ( Vikram Gokhale) and his grandson ( Archit Deodhar). Having lost his parents at an early age, the child lives under the care of his uncle( Ganesh Yadav)  and aunty ( Madhavi Soman). They are joined by his other uncle ( Sarang Sathe) his doctor girlfriend ( Neha Mahajan), who comes to treat the Grandfather.  A mathematician teacher ( Kishore Kadam) arrives to join this family who is a good friend of the Grandfather. But the child is disinterested in math and cheats in his exams to clear the subject. The child’s interest lies elsewhere but will he ever understand and share the love for the subject with his grandfather? How will his grandfather help him to apply the math theories in real life forms the second half of the film.

The film, therefore, gets all the attention of the audience, post interval. Vikram Gokhale delves in his character and gives an extraordinary performance. Child artist, Archit Deodhar, also makes his presence felt. Good support comes from Swati Chitnis. Although in a trivial role, Neha Mahajan is impressive, while Sarang Sathe portrays a different type of person in the family. Shailendra Barve’s music and the lyrics of Soumitra goes well with the doctrine of the story. Last but not the least, wonderful locations of DiveAagar and Revdanda has given a different appearance to the film.