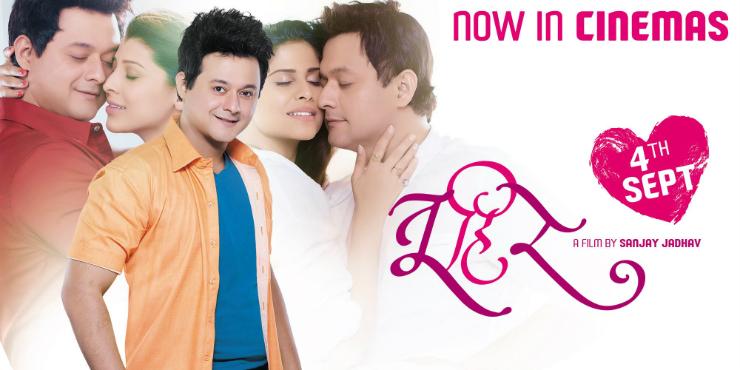 After ‘Duniyadari’ and ‘Pyarwali Love Story’, director Sanjay Jadhav is back with his latest Marathi film ‘Tu Hi Re’, which is written by Manaswini Lata Ravindra, but is actually based on the Tamil film ‘Silunu Oru Kaadhal’,which had Surya, Jyotika and Bhumika Chavla, playing lead roles.

In 'Tu Hi Re' we find Siddharth (Swapnil) and Nandini (Sai), a happily married couple of eight years, in the company of their six-year-old daughter. One day, Nandini receives an envelope containing photos from Swapnil’s earlier marriage and is shocked to see this. She approaches Siddharth’s close friend, Prasad (Sushant Shelar) for a solution. Through Prasad she gets to know that Siddharth was deeply in love with Bhairavi (Tejaswini Pandit) in his final year of college. Bhairavi is the daughter of a M.P. (Girish Oak). Due to opposition from her father, Siddharth had to marry Nandini to fulfill the wish of his ailing mother. It is only after this incident, the film takes a turn.

The first-half of 'Tu Hi Re' fails to appeal, but the second-half has become interesting because of twists and turns used in the screenplay of this film. But, a good performance by the artistes makes this film presentable. Sai’s maturity through her role deserves appreciation. She has done many difficult scenes in the film with complete understanding. Tejaswini Pandit looks stunning and she too has performed tense moments in the film with ease. Swapnil Joshi as romantic hero perfectly suits the character of Siddharth. Child artiste Mrunal has a good understanding of her character but she tends to go a little overboard at places. Music by Pankaj Padghan, Amitraj & Shashank Powar is good and is a well-fit for three songs. Dialogues by Arwind Jagtap, cinematography by Prasad Bhende makes this film more appealing.

The film’s strength is the three big stars, however, the errors like Nandini’s character transformation from that of a village girl to a completely modern woman in a short span of time or Bhairavi’s behavior with her does not emotionally appeal to the audience.

Click here to know more about "Tu Hi Re"