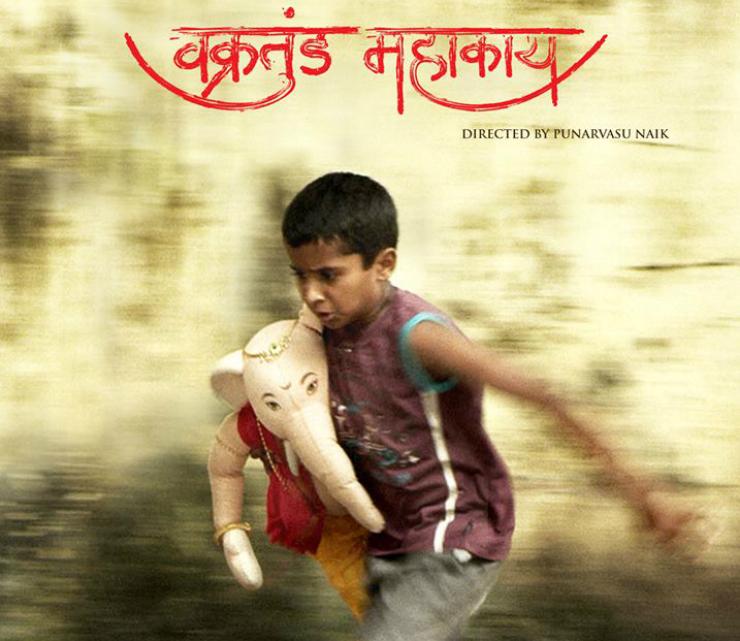 Name of the film: Vakratunda Mahakaaya

Marathi films are going the Bollywood way, as far the techniques and presentation skills of action-packed films is concerned. The recently released ‘Vakratunda Mahakaaya’, directed by Punarvasu Naik, definitely shows influences of Bollywood. The film is set against the backdrop of Mumbai. A terrorist (Vijay Maurya) is hired by a group to plants a bomb in a temple. As he waits for the crowd to gather for the prayer with a detonator, a small boy Altaf (Naman Jain) likes the toy and he picks it up and runs away. By the time the terrorist notices, he flees by boarding a running tempo. Altaf, who is a homeless child, lives with a petty thief Paplu (Nachiket Purnapatre). Both of them keep dodging the terrorist when they come to know that he is chasing them to acquire the toy.

The toy Ganesha keeps on moving from one person to another and that’s how we notice the attitude of different people- be it a traveller, a political leader, his PA, a female senior citizen who sells household items, a youngster going for an interview and another who is having an affair with a married woman.

The film scores well on account of its fast-paced screenplay, especially in the first half. The good outdoor action cinematography is worth admiring too.  The locations selected are very realistic. The performance of child artiste Naman Jain deserves ample credit, as good support comes from Vijay Maurya, Usha Nadkarni and a few others. In every scene, Usha Nadkarni has tried to generate some humor with her performance, which does not go unnoticed. The background score is thoughtful and appealing.

However, the film fails to generate interest, especially in the second half. In fact, the director hasn’t been able to develop the limited story and other characters in the 90 minute length of this film. His focus has been only on the two terrorists chasing little Altaf. The concluding part of the film is also not very convincing for regular film lovers, though it may appeal to international film festival goers.