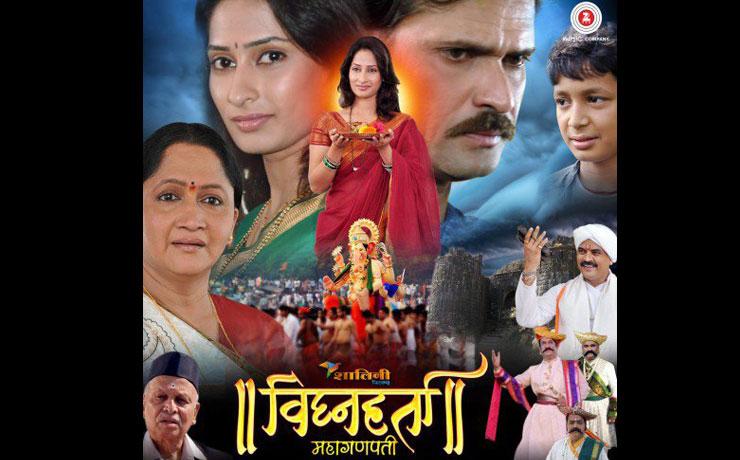 Name of the Film: Vighnaharta Mahaganapati

Name of the Producer:  Suryakant Khavale

Name of the Director: Rajesh Chavan

Many Bollywood and Hollywood movies have reinstated the fact that science cannot solve every mystery or answer every question. These unanswerable occurrences have a name: Miracles. Film ‘Vighnaharta Mahaganapati’ presents one such subject, set against the backdrop of Khavale Mahaganapati, from Taramumbari village. The film delivers a message that spirituality and science do go together.

The film revolves around a ten-year-old schoolboy Shlok Kulkarni (Tej Rane) whose father (Sameer Dharmadhikari) is a reputed builder and mother (Priya Marathe) a housewife, living in Mumbai. The boy’s drawings of a Lord Ganesha in a particular form worries his mother. His mannerisms convince his doctor who is also their relative that he is suffering from Autism Spectrum who advises the parents to get him treated in the USA. In the meanwhile, Shlok and his parents meet with a road accident, on their way to a resort and find themselves at an ashram run by Meenatai Apte (Alka Kubal Athlye). Further in the story, we find the family finally reaches Taramumbari in Deogad taluka of Konkan, much against the wish of Shlok’s father. This place however answers all the questions and the family departs with Lord Ganesha’s blessings.

Though the film’s actual story is limited, director Rajesh Chavan has skilfully given some references from history having its relevance to the place Taramumbari and the importance of Khavle Mahaganapati in Deogad. Special effects have been cleverly used in some scenes. The film does have some drawbacks, like Meenatai following the Kulkarni family from Shrirampur to Mumbai and then also accompanying the family to Taramumbari, Deogad, that too along with old Appasaheb(Jayant Savarkar) who is not known to the family. Post interval, Sharad Ponkshe is shown singing and delivering a message about people falling prey to blind faith in so called Sadhus & Babas and highlighting the importance of devotion to Lord Ganesha.

All the lead artistes in the film, Sameer Dharmadhikari, Priya Marathe, Alka Kubal, Ashalata Wabgaonkar and child artiste Tej Rane and others, have performed their respective roles naturally. Music has a local feel, especially through two devotional songs. Photography by Sameer Athalye is good. In Maharashtra, a majority of the people being strong devotees of Lord Ganesha will surely like this film, as there is also a lot to know about the past history and unknown facts about  the place called Taramumbari, Deogad.